I never win, but I won on Tuesday night. By never winning, I mean I never win at anything random or for that matter, I never win when I play video games against Josh.

On Tuesday, instead of our technical practice, we just had a group run and team social afterwards at PIER i Cafe along Riverside Park. The team met up for a 5-6 mile run and then hung out afterwards. Similar to last year, Coach Brian had raffle tickets for sale. There were a number of winners, but the main winner would win the entire pool of money with half going to the Alzheimer’s Association and the half going to the winner. The winner got to pick if the portion going to the Alzheimer’s Association would go towards their fundraising goal or someone else(s). When Coach Brian was calling out the ticket number, I listened to the first half of the numbers and then tuned him out a little (well, he was speaking really quietly too) because I never win! As soon as he finished calling out the numbers, I asked him to repeat it. What do you know, it was me! The funny thing is that he called out more numbers for the other prizes and one of my tickets got called again! I don’t think there was good shuffling with the tickets; but I won! I decided to donate half of the winnings to my teammates’ Julio and Tania’s fundraising goal. They have been running with me for the last year through the Miami Marathon and Julio and I trained together for the New Jersey race that it seemed appropriate to help support them especially since I knew I would meet my fundraising goal pretty easily this year. The other half of the winnings are with me now, I do plan on donating it back to the Alzheimer’s Association, though I am still contemplating how to creatively share it and maybe the difference will help cover that parking ticket I got last week when I drove out to my run! 🙂

Also on Tuesday night, Coach Ali went through the video of my running form from the previous week with me. She told me that my form was pretty good with the exception of needing to build my quad muscles so my leg is slightly straighter as I push off for my stride. I am probably not describing it right but it’s apparent in the video that I still hold a slight knee bend when I am about to take the stride. I am extremely excited that I have come this far from last year. I remember the critique during last year’s training — arms are too stiff, arms are not pulling back enough, you’re swaying, you look like you’re skipping — all are just some of the million things I was trying to think about when running! There was also that time Coach Ali had me run with a string of licorice so I can focus on not swaying my arms. With time and practice, I guess it’s finally all slowly coming together. As a part of my training this year, I am trying to consciously incorporate more cross-training, including my barre workouts, I am also attending some spin classes, and strength training at the gym when possible. I am learning that running is important but good form and speed will depend on other parts of my body being stronger.

It is raining, it is pouring (well not right now), and I went out to practice on Thursday night. Thursday night was the second installment of our reservoir tempo loops. Since it was not thundering or lightning, practice was not cancelled. At the time I was pretty annoyed that there was nothing too threatening to cancel practice with but afterwards, I am glad we still had it. It was pouring in Hoboken when I left but by the time I got into the city, the rain looked like it subsided. However, clearly we preempted the weather with our team picture (see right)! Up on the reservoir, there was puddles everywhere which made for a pretty zig-zagged run and a lot of slipping. Instead of completing the three loops, we had originally planned for, we stopped after two when the rain started coming down harder. My first loop was 14:23; 9:09 minutes per mile and my second loop came in at 14:09; 8:52 minutes per mile. Both of these times are slightly slower than my times last month (by a couple of seconds in total), which is the opposite of what you’d hope to happen. Instead of making up excuses (!), I am just going to place blame on the puddles, rain, and getting over my cold. Through a series of pictures that Coach Brian captured of me during the run, it’s pretty obvious how I felt about the rain and the run.

Summer Streets started this Saturday and will continue for two more weekends. Since we had been increasing mileage for the last month, this weekend’s long run was a little shorter. We went for 10 miles from Coach Brian’s apartment up to 72nd Street and then down Park Avenue through Summer Streets to the start of the Brooklyn Bridge (next week, we will go over the bridge) and then headed back. Last year during our Summer Streets run, I got dehydrated, Coach Ali had to buy me a bottle of water along the way (because at the time, I wasn’t smart enough to run with money and a credit card, though I learned my lesson immediately after that incident), and then I almost threw up in Union Square. I was scared for this weekend since the I received our training schedule and needless to say, I came to the run prepared with a credit card, cash, and my fuel belt. However, with the cooler weather, clouds, and drizzling, I had a great run and one of my fastest paced long runs of the season. I am hoping this good run will carry me through to next weekend’s long run which will be 14 miles including the lower loop of Central Park, Brooklyn Bridge, and the full stretch of Summer Streets. 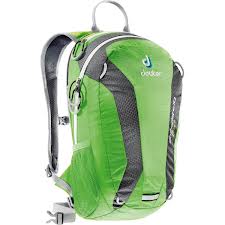 And to conclude this post, I have to tell you about my awesome new backpack. The Deuter Speed Lite 10 was my second attempt at buying a running backpack. The first purchase came in and as soon as I had it on my back, Josh told me I looked like a Teenage Mutant Ninja Turtle. Clearly that one was not a keeper. However, my second attempt is perfection! The Deuter Speed Lite 10 is the perfect size for me; it fits all of my running necessities — an extra shirt or two, flip flops, sunscreen, bug spray, sunglasses, Frogg Toggs Chilly Pad Cooling Towel, water bottle (on the side), and a small compartment for all my little items: wallet, phone, keys, extra safety pins, granola bar, hand sanitizer, hair ties, and more. I used to carry my NYC Marathon Asics drawstring bag, but when I run with it on, it chafes my neck. After a couple of scars along my collar bone, I knew I had to find a substitute. Even though I have only used this bag for the last week, I absolutely love it. I ran a mile and a half up to practice on Tuesday and then back without problems. There are chest and waist straps which I used to hold the bag in place and after just a couple of minutes adjusting the straps, I was all set. I imagine that if I ever get into trail running, running ultra marathons (haha, or not!), or running with a hydration pack (this bag has an add-on feature) this backpack will continue to be extremely useful.

Instead of working out today, I decided my laziness was better suited for writing in my blog (well, I also blame it on eating a ton of food at a baby shower this afternoon)! See what I sacrifice for you all! 🙂 At this time, I am thinking I will attempt to wake up a little earlier tomorrow morning to get in today’s workout, wish me luck!

Happy Sunday night! What were you up to this weekend? Hope it was running-filled!