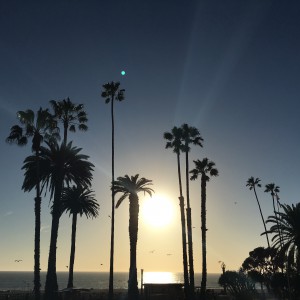 An oldie but a goodie of Santa Monica

Be prepared, this will be a brain dump, from the heart blog post (not that my other ones aren’t, but this one especially) without very many pictures. As you know, I signed up to run the Los Angeles Marathon back in October. It was supposed to my “comeback” marathon so-to-speak. The marathon I would use as an excuse to get back into distance running shape post-baby. The Los Angeles Marathon was this past weekend and I wasn’t there. Unfortunately, due to a death in the family we were at a funeral instead.

Emotions were all over the place last week and still are for many reasons as you can imagine. But let’s specifically try to talk about the emotions as it relates to the race. I realize that it may seem selfish to think about the race at a time like this but it’s hard to separate all the different feelings and the events are obviously related. Back when I signed up for the marathon, I really needed a goal race to force myself to fall into a workout routine. I was struggling with exercising consistently and finding the time to do it. I was down on myself for not working out and didn’t feel healthy. I realize that I was just 3 months postpartum but it was tough especially with the hormones, post-baby blues, and lack of sleep.

When training started at the end of November, I knew it was going to be much tougher to train for this race than I once thought. I underestimated how difficult it would be to routinely get up at 4AM to pump and workout before Josh went to work. I didn’t realize how tough mom guilt was to battle and how training through the winter really just sucks. Despite being out of commission for almost two weeks with a cold over the holidays, snowstorms, and normal bad sleep nights as a result of being a mom, I somehow managed to build my long run mileage up to 19 miles two weeks out from the race. Leading up to that run, I had three weekends of solid 15+ mile runs. While my weekday runs sorely lacked any distance greater than three miles and my total weekly mileage only surpassed 26.2 once, I was feeling confident enough that I could finish the race in one piece. I had accepted that there were probably points that I’d have to walk but it was okay as long as I finished.

The goal was to get in shape and run a marathon with my family, Josh and Charlotte cheering me on and to experience the marathon finish euphoria with my baby girl. Missing the race was disappointing but the event causing the missed race was by far worst. I’m now in the week I was excited for, the week where I would have as much time off from running as needed and then slowly ease back into it without structure. However, I am at this point without structure as it has been hard to find motivation, time, and consistency when there is no longer a specific goal.

Over the last week I have toyed around with immediately signing up for another marathon for this upcoming weekend or the one after, even for a month out from now but I think I’m finally at the point that I may have accepted that I might not be running my first postpartum marathon until the fall. The idea of traveling to another city to just run a race doesn’t excite me. It’s no longer as easy to up and travel as it once was. There are a some local ones but the thought of driving by myself to a race in the cold doesn’t seem fun. And finally, I don’t think I have it in me to keep up with the long runs for another month if I waited for another race.

After talking with a number of friends about it, I am slowly accepting that while a marathon was my goal distance, it is okay to not force one now. I wasn’t well-trained and while it would have been nice to say that I completed 26.2 miles, it was more important that I found a way to get back into some sort of routine and shape. The thought of trying to rearrange travel or logistically trying to find a way to make a marathon work into our schedules was too much. I have already have a number of half marathons and shorter distance races on the calendar to look forward to for the spring and hopefully they will help keep my base mileage up in preparation for fall marathon season.

I still look forward to hopefully running the Los Angeles Marathon one day. We really enjoyed our trip there and hopefully I’ll be able to explore it on foot in the upcoming years. 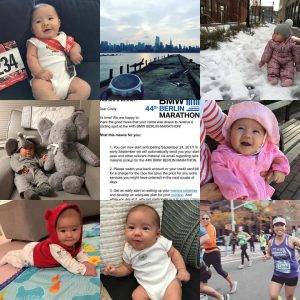 In each of my previous years’ recaps — 2013, 2014, and 2015 — I usually talk about all the wonderful places we’ve traveled, PRs I’ve run, and the 1,000+ miles I’ve run for the year. 2016 was different – it was the year of family. Josh and I welcomed our baby girl to the world in July. While many would like to forget 2016 and believe me, there are definitely parts of the year that were challenging, however, it will always be one of the most memorable years of my life.

—We started the year living in Connecticut and the announcement of our pregnancy. I tried to recap the pregnancy throughout the trimesters as transparently as possible without scaring away all readers! You can catch up on that here if you’re interested — 1st trimester, 2nd trimester, 36 week recap, and initial postpartum thoughts. 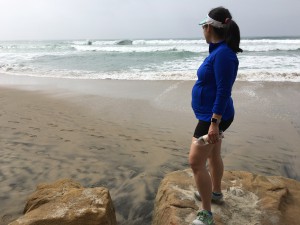 —We traveled to Southern California shortly after that and enjoyed our trip very much in Los Angeles and San Diego. A couple of weeks after that we went to Atlanta to celebrate my brother in law’s wedding. The last remaining trip before the arrival of the baby was to Providence to cheer on Coach Brian as he ran his 50th state marathon.

—We moved back to Hoboken in May. While this meant leaving my job, ending our lease early, and switching doctors late in the pregnancy, this was ultimately the right move for us. We’re happily settled back now and look forward to sharing more of our Hoboken favorites with our little one in the upcoming year. 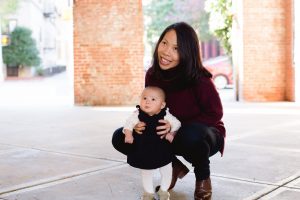 —On the running front, the longest distance I raced in 2016 was 10 miles. I ran 4 races pregnant and 4 postpartum. Total mileage for the year was slightly under 300.

—And most importantly, 2016 is the year that I became a mom!